It is disheartening to see well-meaning people using the term “open source” for just about everything. In my view, the term “open source” carries no meaning anymore. Not only does it miss the point and essence of why software freedom matters (and is the real concern) but it creates so much ambiguity and confusion that very few people really know what “open source” really means. I wish we could all stop using it unless we could use it to mean what it should.

Many years back, FSF published an essay called “Why Open Source misses the point of Free Software”. It is an extremely detailed explanation of what’s wrong. I intend to illustrate how that discussion is even more relevant now, than ever.

What does “Open Source” really mean?

Here is what I found when I searched the website of TED for the term “open source”:

Multiple types of topics and content are tagged as “open-source” even when it has no relevance to that concept. What I’m trying to illustrate with this simple example is that people tend to use the term “open source” to refer to “sharing information”, “access to education”, “collaboration”, “personalised biology”, “access to information”, “governance”, “collaborative security” and more.

The term “Open Source” as defined by the Open Source Initiative has a specific meaning and is qualified by the terms of the Open Source Definition. These terms are very clear and they provide a framework that can tell us if something is “open source” or not. If everyone used the term “open source” to imply what the OSD spells out, there wouldn’t be too many “transmission losses”. But the unfortunate truth is that the “marketing effort for Free Software” has grown into a complete misappropiation of the very values, goals and intents of both the Free Software and Open Source Software movements.

How “Open Source” was born and where it got us!

Over the past 20 years of the Open Source Initiative, they have succeeded massively in popularising the term “open source”. Initially it was probably used in the same context as the Open Source Definition. But over time, it came to mean many other things. And maybe, this happenned because people thought that the term “open source” was a loose approximation of whatever they were trying to convery.

The motivation behind coming up with the term “open source” was that the de facto and accepted term, “free software”, was considered ambiguous and unacceptable to “corporate types”. In 1998, this “marketing effort” was a clever ploy to get a greater diversity of people to consider the option of free software.

However, over the next few years after it was released, the term “open source” came be to be known for its “development and collaboration model” than for software freedom. What gained precedence was the “open” nature of things - an “open community”, “open / public discussions and communication”, “open documentation”, “over-the-internet and open collaboration” etc. Amidst all this noise, the essence of software freedom got further diluted as “over-zealous pragmatism” took over. (I call it “over-zealous pragmatism” because it was considered okay to compromise on the value that free software offered if it made it easier to sell someone the concept of “open source”.)

In hindsight, I feel this has only proved to be counter-productive. As other communities and initiaves have picked up this word play on the word “open”, the term “open source” has lost complete connection to its roots. This is why I said that the term “open source” doesn’t really mean anything specific anymore. Not only does it mean different things to different people, but it doesn’t even mean anything specific to the one who’s using that term. Each person who uses the term “open source” to describe something other than what is defined in the Open Source Definition, is doing so because somehow this loose approximation suits their purpose and lets them imply “something”.

Finally, it only results in “a whole sort of general mish-mash”. Imagine a world where no word has any specific meaning, or where the meaning of many words have lost their literal and technical meaning. Isn’t this what Orwell cautioned us about when he described Newspeak in 1984?

We should stop using the term “Open Source” altogether!

It would have been okay if those who choose to use the term “open source” used it in a manner defined by the Open Source Definition and to refer to free/open source software in particular. The problem arises when there are unintended and damaging consequences to how people use it.

At the same time, if you understand the wide-ranging and damaging side-effects of using the word “open source” when referring to “free software”, then why not use the term “free software” and use the opportunity you have to explain the value and essence of software freedom too.

Consider what the phrase “open source innovation” might mean. Does it refer to “innovation” who’s output is work licensed under the terms of the Open Source Definition? Or does it refer to a “collaborative method of problem solving” which might or might not yield a truly “open source artifact” (software, hardware, writing, music etc.). If that were the intention, then why not use a more accurate phrase itself? Why borrow a well-defined and narrow term for an unrelated usage? Either the understanding about what “open source” really means is flawed. Or the intentional misuse is a trick.

Similarly, consider the phrase “open source ideas”. It is a complete misnomer. The very basis of the Open Source Definition (and of the free software definition) is the Copyright Law. Copyrights cover “expression of ideas” - software, music, writing etc are all considered expressions and hence, are covered by copyrights. Patents, on the other hand, protect inventions. (In most jurisdictions, even India, it is not possible to patent software because software is equated to mathematics and not considered an “invention”.)

But ideas are neither concrete expressions nor are they inventions. Hence, if neither the copyright or patent law is applicable to an idea, what does the term “open source idea” really mean? Does it mean that if you have an idea, you share it widely and openly within a community while retaining the right to be identified as its originator? If that is the intention, then I am sure it is possible to come up with an alternate name. Just sharing something “openly” does not make it “open source”.

“Open Source” is a damaging term

It is also damaging because it dilutes and eliminates all discussion about software freedom - without which it is difficult to imagine how or why the free/open source software movement would be relevant.

I would definitely recommend that we avoid using the term “open source” for completely unrelated topics. Instead, it will benefit us to find better and more accurate terms and maybe, in the long run, “open source” can regain its value and actually mean something.

A good compromise term is FLOSS which stands for Free / Libre / Open Source Source Software and tries to bring the conversation and focus back to freedom. You might then ask a more basic question - why is it important to care about or focus on software freedom at all? I attempt to answer that next.

At the same time, since the “open source” is so misused and misunderstood, should we even it in places where its meaning might actually be clear?

“You should say what you mean!” 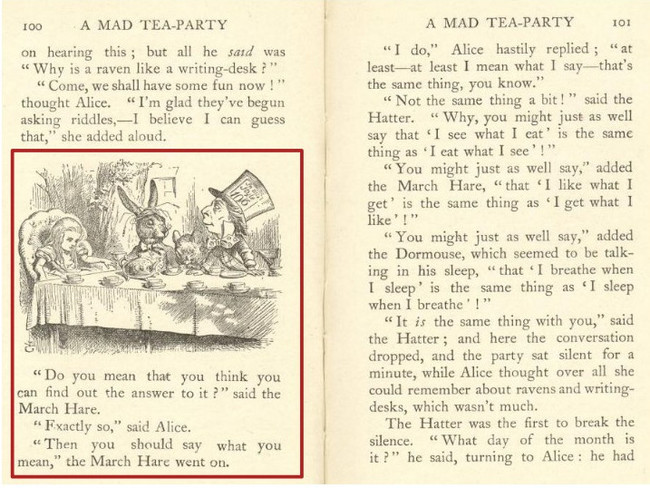 March Hare: you should say what you mean...
From Through the Looking Glass by Lewis Carroll

Let me conclude by quoting a passage from “Through the Looking Glass” by Lewis Carroll. March Hare has a bit of wise advice for us. If we are capable of being accurate about what we are trying to say, then why wouldn’t we say what we mean? Why be ambiguous when it is so easy to be accurate?

Personalising your involvement with Free Software
Advice to students for hackathons